A Misinformation campaign is run to make Muslims fearful of CAA.

CAA: India has always taken a strong stand for what is moral and just. It would have been completely unethical, immoral for the secular and liberal Indian democracy to overlook people already living in India without any proper identity and facility. 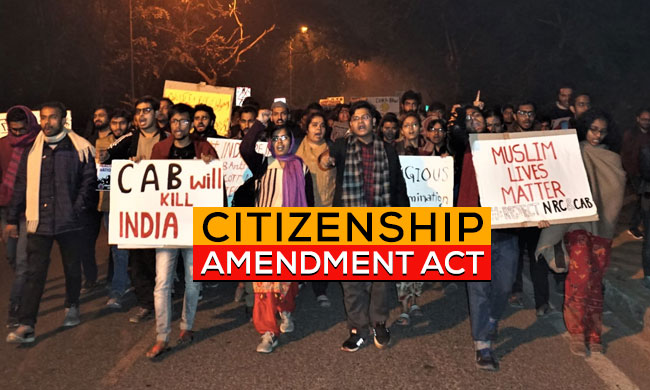 The Current government brining the CAA i.e Citizenship Amendment Act,2019 is not just a historic decision but also upholds the moral and democratic values of the Indian republic. Not mere expression of the majority but it is an article of faith to protect the minorities as well. This law grants citizenship based on religious prosecution and not based on religion which protestors try to portray it otherwise.

During partition, religion played the prominent factor and the constituent assembly even had a debate on neutralizing the citizenship for those communities who were forced to be in minorities in our neighboring countries. However, in this regards it was impossible to draft rules and procedures amidst the refugee's influx. But according to Article 6,7,10, and 11 a window was left open by the constitution to make any laws for these minorities who fear religious prosecutions.

India has always taken a strong stand for what is moral and just. It would have been completely unethical, immoral for the secular and liberal Indian democracy to overlook people already living in India without any proper identity and facility these are people who have fled from Pakistan and made India their home.

Despite their ancestral linkage here and residence, Independence continues to remain without voice or identity.  Leaders from Jawaharlal Nehru to Jayprakash Narayan and Manmohan Singh had also expressed the need to grant citizenship to them. Indian states in the past have even granted citizenship to such people on case to case basis as well.

Believing in the principles of Vasudhaiva Kutumbakam meaning the whole world is one family India gives the right to live a dignified life to its minorities. Why shouldn't India perform its Gandhian duty when secularism at stake in the neighboring countries for minorities? It is unconstitutional to show selective secularism. Ever since the act has been passed many can be seen opposing it and asking why the Muslims have been kept away from this? Well, the purpose of the Act is not economic migration but to address religious prosecution. Countless media reports, as well as Human Rights reports by the UN, states the prosecution of people from these six communities Hindus, Sikhs, Jains, Buddist, Christians, and Parsis in these three Muslim majority countries. On the contrary, it is hard to believe that an Islam follower being prosecuted in a predominately Islamic country or region.

Given that the CAA does not have any effect over the rights of any Indian citizen, in this pretext the protest against CAA and portraying it as anti -Muslim is completely dishonest and also against the secular fabric of India. Our constitution provides enough protection to the minorities in case of discrimination whereas morality teaches us to favor discriminate in a positive way towards minorities and bring them on the playing field equally. The purpose of CAA is to protect the minorities from the neighboring countries who are suffering from human rights abuse. It is contradicting to question that How can steps be taken to protect minorities in India are terms as secular whereas for the neighborhood it's considered communal? A global power like our great country can stay silent when minorities are on the verge of getting extinct across the border.

The conscious fear over CAA is not only against the country's national interest but also hurts the cause of informed dissent of the law. Informed decent is considered legitimate but violence stands no place in the society governed by the rule of law. For those who consider the law as unconstitutional should approach the Supreme court and those who think the protest as the mood of people such make it as their political narrative. Protestors must act mindfully and should not vandalize public property. However, it is a must to follow the principle of "innocent until proven guilty" across the board. Neither the protestors nor the law enforcement agencies have the right to break the law and students protestors can dissent but should be mindful and not fall prey to any groups with vested interests.

Parliament is the most legitimate institution in the country. One must not forget that CAA was passed with an absolute majority. A ruling government will always try to bring things into action which they had in their manifesto.  Parties like AAP, RJD, and Congress supporting the anti-CAA protest must reconsider their campaigns.

A Misinformation campaign is run to make Muslims fearful of CAA. It is unthinkable for the second largest population in the world to be threatened for granting citizenship to a few lakh people. It should be vivid and clear that why this act no one will be deporting Indian citizens; no one can be deported as an Indian citizen. Every sane and right-minded person of this country should help the government to spread facts, not fiction about CAA.