Before we begin let me tell you that it is hard to summarize the fate of millions of women and children who walked hundreds of kilometers under the blistering sun just to reach safely to their native village. Hundreds of pictures went viral surfing on the internet showing these migrant labor women with bags on their head, kid tucked to their waist some even sleeping over a trolley. " We just somehow to want to go back to our villages and die amongst our knit and kin. When the city needed us they kept us employed and now when they don't they just threw us aside unlike deadwood." says migrant labor.

Nearly 25 women went into labor pain on the Shramik Express in the last three weeks. I still wonder what took the Government to run these trains so late.

Kanti Banjari one of the Migrants on the Shramik Express was lucky enough to deliver a healthy baby in  Pandhurna near Nagpur on her way to her native place in Chhattisgarh.

Since Lockdown 1 coping with the pressure of being jobless and not having enough food to eat and then finally boarding on the Shramik Express left them debilitated says 29-year-old Asha Devi who lost her twins when she went into premature labor while her way to Basti from Jodhpur. 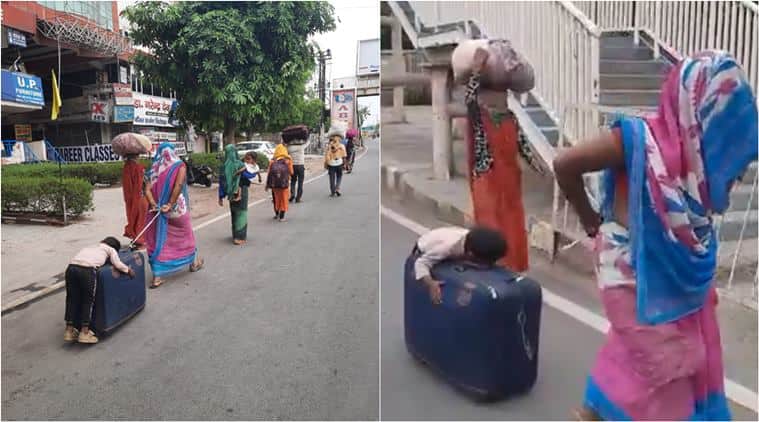 On May 24th 6 months pregnant women lost her kid in West Bengal while traveling on a bus experienced premature labor pain. Fortunately for her, the bus driver took her to the nearby hospital where she said to be recovering.

The desperation of Delhi based Deepali Kumari and her Husband Amit Kumar can be gauged that due to starvation and joblessness they decided to walk their way home which was 1300 km from Delhi to Bhagalpur.

With little money for food and with the aid of some kind-hearted policemen who arranged them a safe place in a Dharamshala where they recovered their strength and set their journey again.

The stories of kids and teenagers in this reverse migration haunted me.

Jamalo a 12-year girl who belonged to Muria walked 100 kilometers she had begun her journey from Bhupalpally Telangana towards here native place Bijapur district in Chhattisgarh died just 11 km away from her home.

On May 12 another 11-year-old kid Nandini who had left from Mumbai in an autorickshaw along with her parents and a brother died on the way when they were hit by an oncoming vehicle. Nandini and her mother died on the spot.

But, there are some stories with a happy ending as well.

Jyoti Kumari a 15-year-old girl drove 1200 km from Delhi to Darbhanga in just 7 days. Due to uncertain lockdown Jyoti's father who is a rickshaw driver when jobless. With no money in the pocket and hunger, Jyoti decided to ride all the way to her home with her father sitting on the pillion.

Eleven-year-old Tabaarak cycled a tricycle with his father and blind mother from Varanasi to their village in Araria in Bihar showing exemplary courage. They had carried an LPG cylinder and a stove to cook meal where ever they halted.

Nearly 700 women and kids lost their lives in this reverse migration.  What is happening with these migrants is only due to the policies and decisions taken on why the Modi government over the past 6 years.

Today I am forced to believe in Thompson Reuters Foundation Poll in 2018 which marked India as the most dangerous country to live for women and children.

Also read Moratorium 2.0: Know How It Will Impact Your Credit Worthiness