Every year nearly 1.76 million people die due to Lung Cancer.  According to the CDC ( Center of Disease Control and Prevention) more people die due to lung cancer than colone, breast and prostate cancer combined. Amongst 40% of the people diagnosed with lung cancer  on detection the disease is seen to have reached into its third stage already according to the reports and 1/3rd of them reach the stage three. 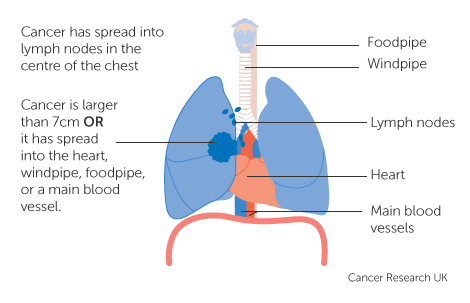 Depending upon an individual the survival rate may vary. For treatment many factors are considered like the individuals outlook, at what stage the cancer has reached, individuals overall health. But Stage 3 cancer is treatable.

Read below the symptoms, treatment and outlook of the most common type of stage 3 small-cell lung cancer.

Stage3A: Lung Cancer in One Side of the body.

In this stage the cancer is considered as advanced locally This means that it has reached towards the lymph node on one side of the chest but has not advanced into other parts of the body.

The main bronchus, diaphragm, chest wall lining, lung lining, chest wall or the membrane around the heart may be involved.  A metastasis (i.e cancer spread) to the heart blood vessels , the esophagus, the trachea, the backbone or chest bone, the nerve governing the voice box, or the carnia a area where the trachea joning the bronchi.

Stage 3B: Lung Cancer spreading in the opposite of the body.

This is the advanced stage of the lung cancer. In this the disease spreads from the primary lungs to the nodes of the  opposite side of the check or to the lymph nodes above the collar bone.

In t his stage the cancer has spread through all parts of the chest of the chest lining, or the membrane of the sac that surrounds the heart or the phrenic nerve.

Cancer reaches stage 3C when two our more separate tumor nodules in the same lobe of the lung spreads to the nearby lymph node. However in this stage the lung cancer has not spread to other distant part of the body.

Unlike stage 3A and 3B in stage 3C cancer may have spread to other chest structure thereby inflaming or collapsing parts or all of the lung.

There are no symptoms shown in the early stage of lung cancer. New noticeable symptoms such as lingering cough, persistent or change in smoker cough like have a more frequent, deeper, production of mucus or blood may be formed. These symptoms may indicate that the lung cancer has reached stage 3.

Other possible symptoms are :

The primary treatment begins with removal of the tumor as much as possible followed by radiation and  chemotherapy.

Upon checking with the condition Doctor may recommend to go for radiation or chemotherapy if surgery is possible to remove tumor.  According to the National Care Institute the survival rate with stage 3B is compared when treatment with radiation and chemotherapy is carried either at the same time of sequentially.

The survival rate is calculated with the people who are alive today upon detection of cancer for the first time. This rate can be divided by the particular type of cancer type at the time of diagnosis.

However the five year survival rate for stage 3A NSCLC is 36%  this data is derived from the people suffering from lung cancer from 1996 to 2010 says The American Cancer Society . Similarly survival rate is 26% for Stage 3B and 1% for Stage 3C.

Things to Keep in Mind.

Consult your Doctor they will guide you with the available treatment upon checking your overall health, age, stage, symptoms and lifestyle factors.

Also Read: Here Is What Happens When You Quit Alcohol