What is NRC? Ever since the Citizenship Amendment Bill was passed by both the houses along with the consent of the President Modi government is all set to be gear up with its next move for NRC (National Register of Citizen) and here is everything you need to know about. The passing of the Citizenship Amendment Act as let to a huge protest across several parts of the country to grant citizenship to minorities across three Islamic countries Pakistan, Afghanistan and Bangladesh this has also led to confusion amongst Indian minority (Muslims) wherein they fear that this act will be used in conjunction with NRC ( National Register of Citizens) which shall deem them as "illegal immigrants"

The citizen registry is fueling panic in the nation since its implication in the northeastern state of Assam.

What exactly is the NRC?

NRC is the register containing demographic records of all individuals who are Indian citizens as per the Citizenship Act, 1955. It also holds records of people who are living illegally in the country. After census of India 1951 the record was prepared and wasn't updated since.

Such a data was maintained only for the state of Assam so far, but on November 20 during the parliamentary session Home Minister Amit Shah declared that the record would be extended to the entire country.

Who are considered as Citizen of India?

Every person born in India is considered as Indian Citizen as per The Citizenship Act, 1955.

(b) on or after the 1st day of July 1987, but before the commencement of the Citizenship (Amendment) Act, 2003 and either of whose parents is a citizen of India at the time of his birth;

(c) on or after the commencement of the Citizenship (Amendment) Act, 2003, where -

(i) both of his parents are citizens of India or

time of his/her birth shall be a citizen of India by birth.

Why was the National Register of Citizen updated in Assam?

In order to maintain its ethnic uniqueness the state ran this specific exercise. In 2013, Demanding the deletion of illegal migrants names from the voters list  the Assam Public Works, Ors, and Assam Sanmilita Mahasangha filed a petition in the Supreme Court.

In 2014, the Supreme Court passed an order to update the NRC in Assam in accordance with the Citizenship Rule,2003 and Citizenship Act, 1955. The updating process began in 2015 and the final updated NRC was released on 31st August, with over 1.9 million applicants defaulting to make it into the NRC list.

Will NRC will be applied Nationwide?

There has been a growing demand nationwide for NRC ever since its implication in Assam. Many top leaders from the Bhartiya Janata Party including Home Minister Amit Shah had proposed for implementing NRC across India.

This will effectively suggest the government to identify the infiltrators who are illegally living in India, detain and deport them from where ever they have come from. 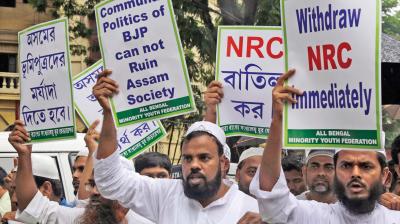 Is Nation Wide NRC any different from Assam?

So far the government has not made any clear update  on NRC all over India hence it does not give a clearer picture of how it's going to be.

People in Assam were asked to submit their proof citizenship at NRC Seva Kendra set across the state, however, it is not sure whether the same model will be applied across the entire country.

Under the supervision of the Supreme Court, the Assam NRC was specially mandated for the state in the Citizenship Act, 2003. At present, there are no such guidelines for countrywide updation if NRC is carried out nationwide it will be under the Union government direction.

However similar processes to NRC have already begun in the state of Nagaland as Register of Indigenous Inhabitants and (NPR) National Population Register which will contain the biometric as well as the demographic information of citizens.

How CAA and NRC are related?

The nationwide NRC which is still under proposal stage if implemented will target those illegal immigrants who live in India.

But with the CAA government has opened doors for immigrants and refugees of Hindu, Sikhs, Jains, Parsi, Christians and Buddhist communities from Pakistan, Afghanistan, and Bangladesh who were fled for being religiously prosecuted.

This means if NRC is applied nationwide any illegal  immigrant but individual from this above 6 communities and the three countries will be affected.

Moreover the exclusion of Muslims from the Citizenship Amendment Act has created a fearsome amongst Indian Muslims of being questioned over citizenship if unable to furnish adequate documents.

What Does the government have to say linking of CAA with NRC?

As of now, the government has strongly  denied the use of the CAA for updating NRC.  Home Minister Amit Shah has said that the NRC carried in the state of Assam was not carried on a religious basis.

While speaking in the Agenda Aaj Tap Programme, he said " Whoever is not eligible to be included in the NRC will be send out of the country."

When asked about the government's declaration to implement the NRC nationwide, he said," bonafide Indian citizens" should have no fear.

"No Indian will be sent out of the country. I want to tell the minorities that special facilities will be made for them and also other people (for NRC). But I also want to ask should we keep our borders open for illegal immigrants."

"Whenever the NRC will come, no person on minority the community will face injustice but no infiltrator will be spared," Shah Said.

Union Law Minister Ravi Shankar Prasad said," NRC hasn't been finalized yet. There is no question of joining CAA and NRC as the draft is yet to be completed."